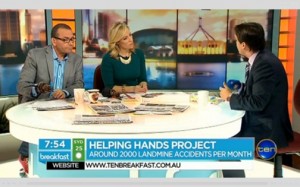 We are excited by how much media attention the Helping Hands activity has been receiving lately. It is really encouraging to see that everyone that has experienced this activity is eager to share it with as many people as they can. Check out our latest coverage:

This is only a sample of the coverage this activity has received in just 5 months. It is exciting to see that momentum is building and that word is getting out there about this inspiring experience. With more people learning about this everyday, this activity is growing from strength to strength!